Fossil energy is most ancient and wise! As gemstones, they are believed to increase life span, reduce toxins, anxiety, stress, balance the emotions, and make one more confident.
Containing supernatural and physical healing powers, they help promote a sense of pride and success in business. Healers use fossils to enhance telepathy and stimulate the mind.
These are two of our favorite fossils which you can find in our store at High Vibe NYC::

Originating 50 to 70 million years ago, Septarian Fossil nodules formed in the Cretaceous period when sea levels were much higher. These gems are made of organic matter (tiny sea creatures!) which converged with molten Earth and sunk deep into the seabed, forming cracks within tiny mud balls. You will often find fossilized calcite, aragonite, chalcedony, and smoky quartz in these pieces. One of the most unique fossil gems known to man!

Many people believe Septarian to be a healing stone as well as one that offers protection. It is associated with the lower chakras and nutures and grounds the bearer. Septarian is used for healing of the blood and kidneys.

Septarian stones are found along the Gulf of Mexico, all the way inland to Southern Utah. Other specimens have been discovered along Madagascar where water levels similarly receded. The name Septarian comes from the Latin word “septum,” meaning “partition” — given to it for its cracked appearance. Some refer to it as the “Dragon Stone” because it is thought to contain each of the four elements.

Is metaphysical properties are boundless! It works to open psychic abilities, helps with communication, gives reliefs for muscle spasms. Overall, it is beneficial for health and well-being. Shamans use it for grounding a space during guided journey work, –especially in large groups, for its communication opening up the space to universal wisdom. And most interesting of all, this stone is used for invisibility! You can use it to dispel interest in you or your appearance if you want to go unnoticed.

(Note: We have not personally tested its invisibility powers, but we invite you to give it a go!) 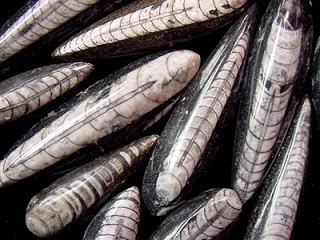 The Orthoceras fossil was formed 400 million years ago and has a name meaning “straight horn,” given to it for its long, cononical structure. Although it is now extinct, the creature encapsulated in this gemstone is an ancient ancestor (see post’s main image) of both the squid and octopus — two of Earth’s most intelligent and mysterious creatures!

These are excellent gemstones for treating issues of or related to the skeletal system, especially in old age. They can help reduce anxiety, stress, and fatigue as well as mystically increase ones telepathic abilities. In general, it is an excellent companion for aging, for it can help to release the fear of getting old, PLUS it could make you wiser!

Its benefits do not end there, because it is also a great companion gemstone for business pursuits! It could brighten and supplement your accomplishments, instilling quality and excellence withing the business environment. Orthoceras also helps one to achieve the recognition by others for your accomplishments as well as allowing you to recognise and praise the accomplishments of others, freeing you from jealousy and selfish acts for personal gain.

All in all, we believe in the power of fossils and think Septarian and Orthoceras are especially great additions to your Rockin’ collection!! Come grab some in the store before we are all sold out!

It’s All About The Heart!